Get the world’s fastest VPN experience

The results are in...Hotspot Shield was named the world’s fastest VPN. Find out why experts say Hotspot Shield may defy physics and increase your connection speed.

In October 2019, the experts at Ookla’s Speedtest.net conducted an independent study, pitting the leading VPN providers against each other to find out which service is the fastest. In both short and long-distance connection testing, Hotspot Shield came out on top, proving that under all circumstances tested it remains by far the fastest VPN on the market.

Over short-distance connections, such as when you connect to a server located close to you, Hotspot Shield was more than 1.4x faster than the nearest competitor. 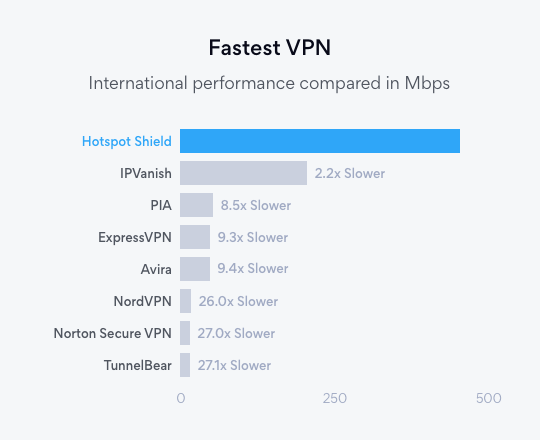 Over long-distance connections, such as when you are located in San Francisco but connect to a server in London (a common requirement for VPN users who travel abroad or want to access content from other countries), Hotspot Shield was more than 2.2x faster than its closest competitor. 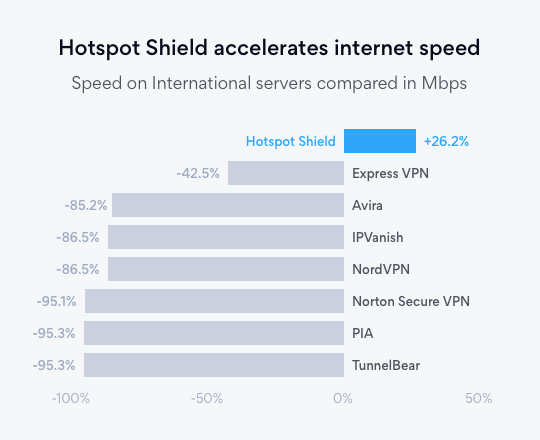 Securing the internet for millions of people worldwide

Many of today’s VPN providers use antiquated technology first developed when Netflix only shipped DVDs and before Apple even invented the iPhone. Back then, VPN protocols such as OpenVPN were designed to put the security of business networks ahead of speed and performance.

In today’s world — where we stream, download, share, and communicate online — that compromise no longer works. That’s why Hotspot Shield developed its own proprietary protocol named Hydra that delivers no compromises when it comes to industry-leading security and performance.

Hydra is Hotspot Shield’s ‘secret sauce’. It delivers a truly enhanced VPN experience optimized for the modern world, providing speeds considerably faster than any other provider along with unparalleled protection against today’s online threats.

A VPN protocol determines the set of rules used to negotiate the connection between the VPN app you’re using and the VPN server you’re connecting to. When that connection establishes, the data gets shuttled across the connection in packets. Inevitably, especially over long-distance connections, some of those packets will get lost.

When that happens, your generic VPN protocol will typically slow your bandwidth and sometimes even try to restore those same packets. That all takes time, and it’s why most VPNs will make your internet considerably slower.

Hydra works differently. The Hydra protocol can differentiate between different types of packet losses, and ignore packet losses when it’s not due to legitimate congestion. This means that Hydra won’t overreact to packet losses and unnecessarily slow your bandwidth, delivering faster, more consistent connection speeds that, in some cases, can actually increase your download speed compared to when you’re not using a VPN.

Hotspot Shield’s free VPN uses the same Hydra technology as our Premium version. However, you are limited in functionality. For example, with Hotspot Shield Basic, you can only stream in SD and you are capped at 500mb of data. You also only have access to one server location (United States).

To get the fastest VPN, you’ll need to upgrade to Hotspot Shield Premium. Not only will you get unlimited bandwidth and access to 80+ countries and 35+ city servers, but you’ll also enjoy speeds 4x faster than Basic so you can stream in full HD quality and never experience buffering or lag. You also get 24/7 support and a 45-day money-back guarantee.

Hotspot Shield is more than just a fast VPN