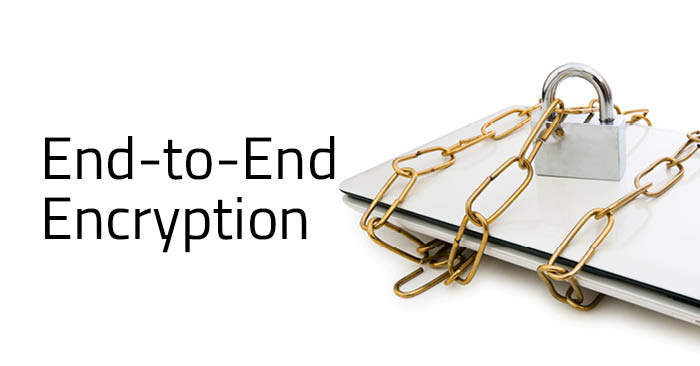 Encryption is one of the main tools that companies use to gain consumer trust and keep information private. There are different kinds of encryption, each with its own advantages and drawbacks.

One form of encryption that is sparking discussion across the board is end-to-end encryption. What exactly is it, and what will its emergence mean for you?

End-to-end encryption essentially means that any information you send — whether it is an email, text message, or other form of communication — is virtually impossible to spy on from the time it leaves your device to the time the recipient opens it. Sounds pretty sweet, right? The only person who can read your message is the person to whom you send it. Tech companies and even the government cannot take a look at your messages.

A Step up from the Standard

Encryption in general is supposed to keep your information safe. For example, when you’re shopping online, you should only use websites that have a little lock symbol next to the URL.

The lock means that the website uses SSL encryption, which is a bulwark against most hackers who might be roving cyberspace with the aim of stealing your identity.

However, as The Washington Post explains, “while this kind of encryption will protect users against ordinary bad guys, it’s useless against governments.”

End-to-end encryption, on the other hand, takes the government out of the equation; not even the companies whose servers manage the information you send can give the authorities copies of your sent emails and text messages using this type of encryption. While some may see end-to-end encryption as a threat to national security, it is also perhaps the best way to protect user privacy.

Because end-to-end encryption is so difficult to unravel, it may seem like an invincible shield against information thieves. However, that is not the case.

Wired.com points out, “Rather than try to actually break the encryption, for instance, an eavesdropper may try to impersonate a message recipient so that messages are encrypted to their public key instead of the one the sender intended.” That is called a “man in the middle” attack. There is a way to combat such an attack; it involves a passphrase that users on each end must recite.

The other weak point of end-to-end encryption is the devices that send and receive messages. Even if the encryption locks up your information tighter than prisoners in a maximum security prison, your device — and the device of the message recipient — remain vulnerable to cyberattacks.

Other Caveats of End-to-End Encryption

The flood of emails that drench your inbox on a daily basis made that important message disappear. Instead of sifting through all your emails to find the one you need, you simply type a keyword in your email provider’s search bar, and voila!

The email appears. End-to-end encryption makes that search feature virtually useless because it does not allow email providers to see the content of your messages.

With all of the pitfalls associated with end-to-end encryption, it may seem like using it isn’t worth its benefits. However, it is gaining popularity. Why?

It isn’t necessary for users on a specific system always to use end-to-end encryption, so the password conundrum presented in the previous paragraph does not have to be an issue.

The main reason for attention being heaped on end-to-end encryption, though, is privacy. Since Edward Snowden revealed that the government collects information on the Internet activity of U.S. citizens, the cry for a private way to communicate has grown steadily louder.

Tech companies have heard the cry for enhanced privacy, and they are complying. In fact, the Facebook messaging service, WhatsApp, recently started using end-to-end encryption for many of its users.

The creator of WhatsApp, addressing the concerns that government officials have about end-to-end encryption, says, “Nobody should have the right to eavesdrop, or you become a totalitarian state.” The switch to end-to-end encryption was a seamless one for WhatsApp users; it was an under-the-surface change that made a big impact in who has access to their data.

Other email providers and tech companies are also offering, or planning to offer soon, end-to-end encryption. Examples include Apple and Yahoo.

Will end-to-end encryption have a big impact on communications? Probably not. To maintain ease of use within your inbox, you may choose to encrypt only highly sensitive messages.

Since Google uses your activities to provide targeted advertising, there has been some speculation that end-to-end encryption will have a negative impact on marketers.

That will probably not be the case because, as MarketingLand brings out, “Those sending [marketing] emails aren’t going to see any major changes because of this. It’s not anything like when Google introduced auto-unsubscribe or introduced its Gmail inbox tabs. Mail from commercial providers will likely come-and-go as normal.” AdSense marketers are likewise unlikely to feel pain because of end-to-end encryption. Again, that is because it won’t be necessary for users to encrypt the majority of messages they send.

End-to-end encryption is a useful tool for those in search of a way to safeguard their communications; it can keep your sensitive information — such as account numbers and other personal items — under wraps. It is also a protection against government spying and villainous hackers. Because of end-to-end encryption’s popularity is in its nascent stages, it may be some time before its impact becomes clear.